In PART 1 of this three-part post, I described the case against Carloss Robinson and walked you through the ample forensic evidence he left at the scene of the crime. Now for PART 2, the case against Elwood Jones, we have an entirely different situation. There is little to no forensic evidence linking him to a brutal murder, yet he was found guilty and sentenced to death.

This brings me to another lesson I have learned from watching so many episodes of Forensic Files, my favorite Murderporn series: Systemic racism runs deep within the criminal justice system. So, while I agree with the death penalty as a concept, I think the execution leaves much to be desired (how’s that for a pun?!).

Death penalty cases are extremely expensive, racially biased, and the cocktail drug used to execute inmates is basically a form of torture.

Worst of all, there is plenty of evidence that innocent people have been – and continue to be – sentenced to death. I think this next episode might actually be one of those cases.

Summary: An elderly woman is brutally beaten to death in her hotel room (making this one of the most offensive punny titles in the entire series). Elwood Jones, a hotel maintenance worker, is convicted and sentenced to death.

This case always bothered me because the most incriminating piece of evidence could have easily been planted. At the end of the episode Elwood and his family claim that he was framed by police… was he?

Let’s take a look at the evidence.

Master Key Card: Whoever murdered the victim gained access to her hotel room with a master key card.

The prosecution stated that Elwood had a master key card which he used to break into the victim’s hotel room and rob her. They believed he got caught in the act and beat her to death. The defense pointed out that virtually all hotel employees have access to a master key card and no eye witnesses or video surveillance actually proved Jones used his master key card to access the victim’s room.

Potential Murder Weapon: Jones’ toolbox contained a door chain and walkie talkie; both were consistent with bruising patterns found on the victim

Again, virtually all hotel employees have access to these tools. No biological evidence from the victim (blood, hair, etc.) was ever found on the tools belonging to Jones. So, really, no murder weapon was ever found.

Fight Bite: During the attack the victim was punched in the face with enough force to break her teeth. Jones had a wound on his hand which the prosecution claimed was a result of the said beating.

To me this was the most compelling piece of evidence, especially because Jones changed his story about how he got the wound when questioned by police. Plus, his wound became severely infected with E. corrodens, a type of bacteria that lives on human teeth and, according to Jones’ hand surgeon, a lot of force (like a punch) would be required to dislodge it. Jones’ hand surgeon had only ever seen three cases of E. corrodens infections and all were caused by a “fight bite” (i.e., from punching someone in the mouth).

We know for sure that Jones punched someone really hard in the face around the same time that the victim was murdered, but there is such a thing as a coincidence. I have seen multiple Forensic Files episodes in which the circumstances strongly implicate one person – but then further investigation clears them entirely. I really wish the protection had taken extra steps to prove Jones’ fight bite came from the victim.

Here’s how they could have done it:

Step 1 – test the victim’s mouth for the presence of E. corrodens (not everyone has this type of bacteria)

Step 2 – if found, test the strain in her mouth with the strain found in Jones’ injured hand.

Detectives used this very technique to build a case against the Rajneeshee cult in the Forensic Files episode “Bio Attack”.  If you watched Netflix’s hit documentary Wild Wild Country, then you already know about the Rajneeshee Cult and its sociopathic spokesperson Ma Anand Sheela, pictured below. Sheela poisoned more than 700 people with Salmonella in an attempt to rig her town’s election. To prove she was responsible scientists compared the surface protein profile of the Salmonella found in Sheela’s laboratory with the Salmonella that sickened the townspeople. It was a match.

Like Salmonella, the cell surface proteins of E. corrodens vary from strain to strain, so theoretically a similar comparison could have been made.

In addition, the victim was Hepatitis B positive. Had Jones punched her hard enough to transfer her E. corrodens deep inside his hand, his defense team argued that he would have also contracted the victim’s virulent Hepatitis B strain in the process. Jones tested negative for Hepatitis B.

Victim’s Jewelry: The victim was attacked after showering so she was found in the nude. Her family said she never took off the necklace, so the prosecution claimed Jones snatched it off of her during the attack. 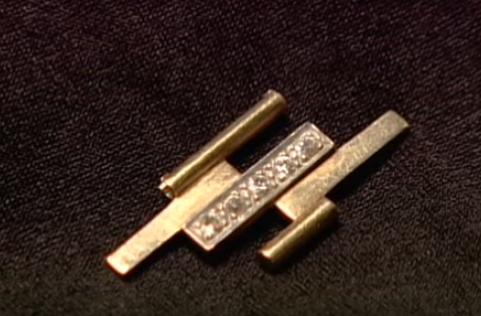 The necklace was allegedly found by a police officer who search Jones’ toolbox. No blood or fingerprints were found on the necklace. This strikes me as a piece of evidence that could easily have been planted.

Oddly enough, Jones was not charged with the victim’s murder for an entire year after police allegedly found the victim’s necklace in Jones’ possession. It is pretty suspicious that they waited so long to indict him despite having such a damning piece of evidence. It almost seems like, after a year of failing to find the perpetrator, investigators pinned the crime on Jones lest this become a cold case.

Jones’ execution is scheduled for 2021, and there are multiple ongoing efforts to overturn his conviction.

View all posts by jesscuest